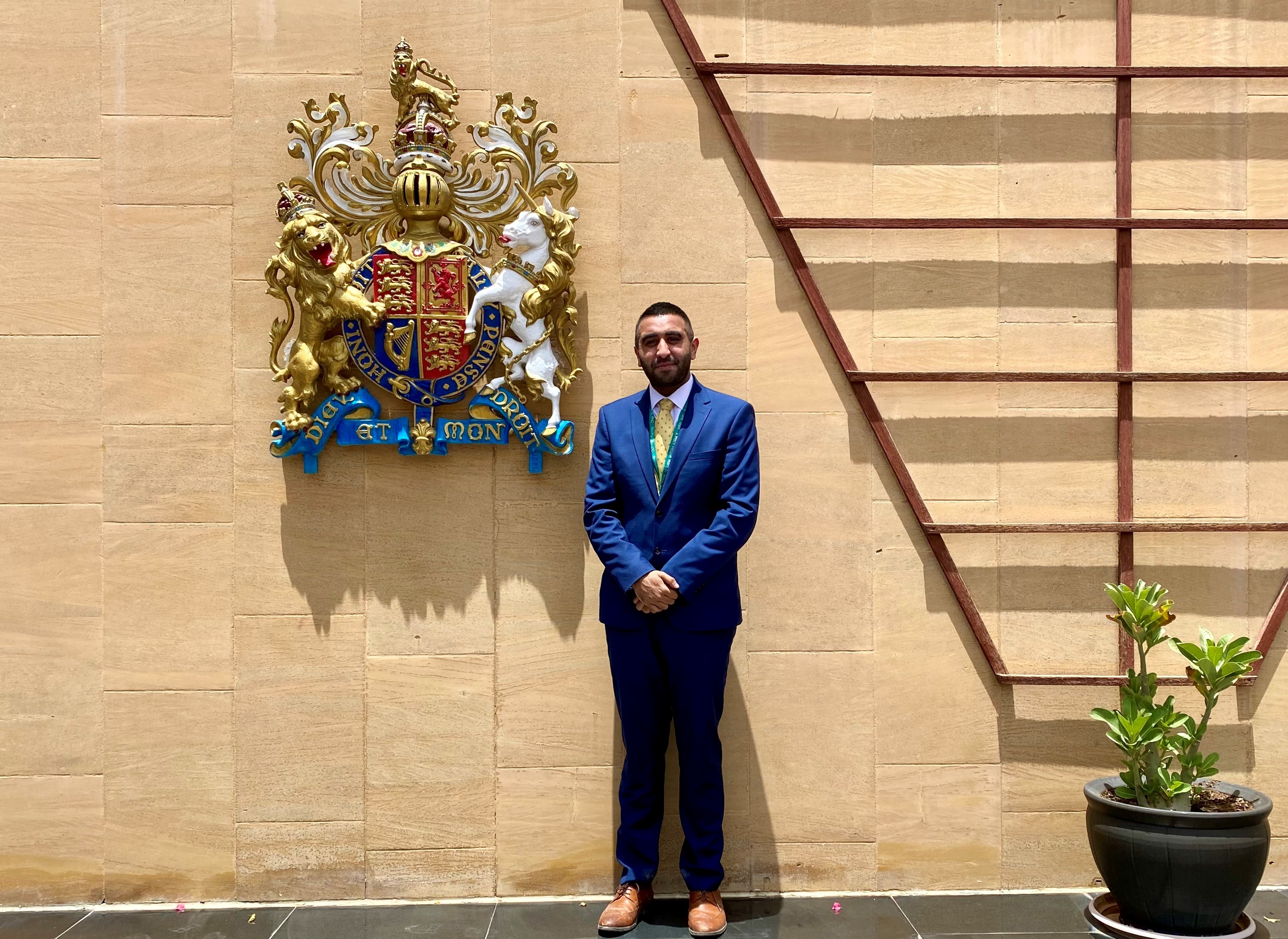 A former Bury College A-level student has been awarded an MBE for his services to British Nationals overseas. Mohammed Ahmed, 28, has received this honour to recognise his contributions to the emergency repatriation operations he began at the start of the COVID-19 pandemic, helping British nationals stranded in Saudi Arabia to return home.

Mohammed, a former Hazel Wood High School student, left Bury College in 2011, achieving A grades in English Language and Sociology and a B grade in Economics. He went on to study at the London School of Economics, after spending three months volunteering in Uganda as part of the International Citizen Service.

In 2019, Mohammed moved to Riyadh, Saudi Arabia to take up a diplomatic posting for Her Majesty’s Government, as an Aviation Security Liaison Officer. Mohammed’s day job involves working with the Saudi Arabian authorities and partners to help protect British nationals visiting Saudi Arabia from terrorism, but the COVID-19 pandemic meant that his role expanded significantly.

After Saudi Arabia’s response to the pandemic, shutting borders and suspending all international flights on March 23rd, thousands of British nationals were stranded, with no way to get home. Mohammed voluntarily stepped up to be the operational lead for the crisis response. He negotiated for several special flights to be arranged to help Brits get home. Mohammed began a huge crisis operation to collect passenger details, working seamlessly with the airline to contact these passengers, communicating with passengers to help book their tickets and support them, arranging slots at Heathrow airport and agreeing security arrangements, and arranging special permission letters attested by the government so passengers could move to the airport during strict curfew hours.

Seven thousand people were repatriated back to the UK, including a man from Bury who was able to return home from Jeddah. One of the British nationals the Embassy helped was an ex-marine who was stuck on an oil rig, and needed to get home to be with his wife for the birth of his first child. Thanks to Mohammed and his colleagues’ work, he was able to make it just in time. Mohammed also personally helped another British national get home, so he could be with his mother who was in intensive care with COVID-19. He managed to get him a seat on an overbooked flight, which meant he spent his mother’s final day by her bedside. Mohammed said, “I’ll never forget some of these people and their stories. I’m so glad and honoured that I was in a position to assist them at their time of need.”

Mohammed is grateful for the mentorship he received from his tutors during his time at college. He didn’t have any plans to go to university until he was inspired by his tutors; “I wouldn’t be where I am today without the inspiration and mentorship I received at Bury College.”

The skills that Mohammed gained throughout his studies have been helpful throughout his career. The course content is very relevant to his work in policy-making, and the soft-skills he gained, not just through his studies but through his extra-curricular activities, have been useful daily. Mohammed credits Bury College as the place he began to learn how to communicate effectively, engage with people of different backgrounds, work in teams, and think critically. He said, “Bury College played a very important role in my development. The skills I learnt in college shaped my career.”

On being awarded the honour, Mohammed said, “I was very shocked to be told by HM Ambassador that I had received the honour. It is very humbling to be nominated for this recognition by my colleagues. I’m extremely grateful for the honour and dedicate it to my colleagues and all the inspirational key workers who worked around the clock and made personal sacrifices to keep the country running during the pandemic. I also dedicate it to my grandparents who I lost in the last year and half.

“What makes this honour even more special is that I come from a low socioeconomic background – just 11 years ago, I was a pupil in receipt of free school meals and was the first in my family to go to university. I hope to use opportunity to continue the mentoring and outreach work I was previously doing in schools and communities to raise the profile of public and civil service, and help raise ambitions and aspirations of working-class young people.”

Mohammed is especially proud to represent Bury on the honours list; “No matter where my work takes me, I still see and call Bury home.”